To share your memory on the wall of Ray Young, sign in using one of the following options:

Ray retired from the United States Air Force in 1984 after 20 years of service. For the following 23 years Ray worked for Leavenworth County. He spent 8 years working for the Leavenworth Sheriffs Dept. and 15 years as a Probation Officer before retiring in 2008.

He was preceded in death by his parents and a younger brother, Tom Evans.

He enjoyed taking family and friends to the lake, camping, boating and skiing. Ray was a big fan of the Kansas City Chiefs, Royals and NASCAR racing. In his younger years, Ray enjoyed going out dancing with his wife and friends.

To send flowers to the family or plant a tree in memory of Ray Young, please visit our Heartfelt Sympathies Store.

Receive notifications about information and event scheduling for Ray

There are no events scheduled. You can still show your support by sending flowers directly to the family, or planting a memorial tree in memory of Ray Young.
Visit the Heartfelt Sympathies Store

We encourage you to share your most beloved memories of Ray here, so that the family and other loved ones can always see it. You can upload cherished photographs, or share your favorite stories, and can even comment on those shared by others.

Kim Woodson and Your family sent flowers to the family of Ray Young.
Show you care by sending flowers

Your family purchased flowers for the family of Ray Young. Send Flowers

Posted May 30, 2020 at 04:53pm
Janice and Family,
Sorry to learn of Ray's passing. He was a dedicated individual and served his country and community proudly. May he rest in peace and God comfort you and your family.
Terry & Kay Campbell
Comment Share
Share via:
K

Posted May 30, 2020 at 01:38am
Janice my thoughts and prayers are with you during this difficult time. I always looked forward to seeing and visiting with you and Ray. He will be missed but will forever be in your heart.
May the Lord bless you with pleasant memories. Kathy Gallagher
Comment Share
Share via: 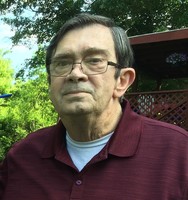