To share your memory on the wall of Raphael Hrenchir, sign in using one of the following options:

On Dec. 1, 1974, Raphael married Anna Lea Selvey at St. Joseph Church in Leavenworth. She preceded him in death in 2015. He was also preceded in death by his parents and a sister, Rita Seymour.

He served in the United States Army and the Army Air Corps. Raphael was a Veterans Honor Flight Recipient. He was involved in his community, serving on the board of Council on Aging, he was a member of the Knights of Columbus and an active member of his church, Sacred Heart Catholic Church.

In his free time Raphael enjoyed gardening, woodcarving, birdwatching and doing anything he could to be outdoors. He also enjoyed travelling.

A visitation will be from 6 to 8 p.m., with the praying of the rosary at 7:30 p.m., Monday, April 26, 2021, at the R.L. Leintz Funeral Home. Mass of Christian Burial will begin at 10 a.m. Tuesday, at Sacred Heart Catholic Church, with Fr. Marianand Mendem, as celebrant. Burial will follow at Mt. Calvary Cemetery. Memorials are suggested to Sacred Heart Church.
Read Less

To send flowers to the family or plant a tree in memory of Raphael Hrenchir, please visit our Heartfelt Sympathies Store.

Receive notifications about information and event scheduling for Raphael

We encourage you to share your most beloved memories of Raphael here, so that the family and other loved ones can always see it. You can upload cherished photographs, or share your favorite stories, and can even comment on those shared by others.

Posted Apr 25, 2021 at 07:16am
Daddy loved the weather! When traveling, and in a new hotel room, he would check if they had the Weather Channel first. After checking the weather information, he would then look for EWTN (Eternal Word Television Network) while unpacking.
When visiting his and Mom's home, it was not uncommon to find either one playing on the television.
Comment Share
Share via:
TM

Posted Apr 24, 2021 at 02:19pm
I wanted everyone to know how much we loved Ray (grandpa to me),and how big of a family will miss him. 4 biological children,2 step children,21 grand-children,24 great-grandchildren,and 3 great-great-grandchildren. That makes 5 generations alive when he passed,pretty impressive I think, we know he loved all of us from the bottom of his heart. I know he knows we did. The only thing that is making this sad moment a happy one for me is knowing he is with grandma Ann again. I know we will all miss him greatly talking to us with the tooth pick in his mouth or his binoculars in his had at the kitchen window watching the birds or just listening holding our hands. We will see him again this is not forever. I love you grandpa and will be seeing you again with grandma. 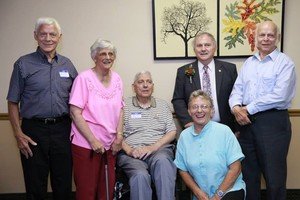 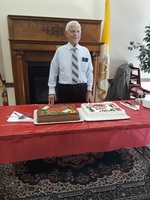 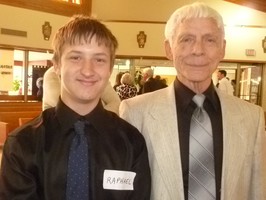