To share your memory on the wall of Mary Welch, sign in using one of the following options:

She was the oldest of three children and grew up in Winchester, Kan. During her childhood, Mary Jean enjoyed going to work with her father, who worked on a farm. As a child, Mary Jean had to learn sign language to communicate with her parents who were both deaf. To learn to speak, she would travel to her Grandparents house in Axtell, Kan. She became fluent in speaking and signing and amazed people because she could carry on two separate conversations at one time.

Mary Jean met her husband, Frank Welch Sr. in 1946. Frank was a widower with three small children. After just a short time, Mary Jean developed a very close relationship with Frank and his children. On January 12, 1947, Mary Jean married Frank, bringing her to Leavenworth, Kansas. They had two children of their own in the two years following their marriage.
Mary Jean spent many years as a homemaker, ironing for her many clients, and helping her husband. Mary Jean worked at Russel’s Pharmacy and then Treasury Drug for many years. Following her time at the drug store, Mary Jean had many different jobs that involved cooking and serving others. Her main objective and job in life was to always take care of her family and extended family.

Mary Jean was a member of Southern Heights United Methodist Church and she belonged to the Ladies Auxiliary of the VFW. She enjoyed cooking, canning and baking pies. She loved dancing, talking with anyone who ventured into her kitchen, taking care of her many animals and watching the Royals and Chiefs games.

Visitation will be from 9:30 to 10:30 a.m. Saturday, Oct.24, 2020, at the R.L. Leintz Funeral Home. The funeral service will begin at 10:30 a.m., Saturday, at the funeral home. Burial will follow at Mt. Muncie Cemetery. Memorials are suggested to Southern Heights United Methodist Church.
Read Less

To send flowers to the family or plant a tree in memory of Mary Welch, please visit our Heartfelt Sympathies Store.

Receive notifications about information and event scheduling for Mary

There are no events scheduled. You can still show your support by sending flowers directly to the family, or planting a memorial tree in memory of Mary Welch.
Visit the Heartfelt Sympathies Store

We encourage you to share your most beloved memories of Mary here, so that the family and other loved ones can always see it. You can upload cherished photographs, or share your favorite stories, and can even comment on those shared by others.

Posted Oct 23, 2020 at 09:09am
What a lovely, smart, cheerful lady! I will miss her and I know she was loved by many. She was fascinating to visit as she loved to reminisce. She has pleasant and easy to please. I know she was a wonderful mother and will be missed by all. I know I will miss her. You are all in my thoughts and prayers. With sympathy, Janet Otting
Comment Share
Share via:
JN

Posted Oct 22, 2020 at 06:54pm
Terry and Jo Ann Norman, Lansing, Kansas: Virginia, so sorry to hear of your mother's passing. I know how much she meant to you. We will keep you in our thoughts and prayers and send much love to you and your family.
Comment Share
Share via: 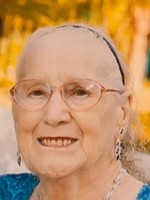