To share your memory on the wall of Julie Oeser, sign in using one of the following options:

Julie was born on May 23rd 1958, in Lynwood, California, to Kathryn June Spencer and Verlin Grant Bocker. A precious child, she grew up in the Church of Jesus Christ of Latter Day Saints, spending her youth in Sunday school and various church programs. At the age of five, she learned to play the piano. By middle school, she learned to play the flute and later joined the La Palma, California John F. Kennedy High School’s “Fighting Irish Band,” often speaking fondly of getting to travel to Dublin, Ireland in 1974 to play in the St. Patrick’s Day Parade.

Julie’s grandmother, seamstress Amanda Hancock Spencer Naegel-who prepared clothes for the Supremes, Dolores Hope, Lena Horne, and Debbie Reynolds-taught Julie how to sew when she was eight years old. Julie became smitten and quickly learned how to make clothes for her dolls and herself. Later in life, Julie became a passionate and talented quilter-although she was always modest about her abilities. She joined the Sunflower Piecemakers Quilt Guild and won numerous quilting awards, including her 2013 first place Log Cabin Challenge Quilt, “Casablanca,” and her 2015 mini quilt, “Blessed are the children of quilters for they shall inherit the quilts.”

Life took an adventurous turn when she met Jeff Oeser, a former Army soldier and the love of her life, while the two were working at JCPenney in Buena Park, California in 1978. The happy couple got married on July 21st, 1979. With Julie’s encouragement, Jeff reentered the military as an Army officer in 1983. Julie proudly supported her husband and raised three daughters all across the US and Germany. She moved 13 times, often having to parent solo while Jeff was deployed or traveled for training.

Julie embodied selfless service by caring for her community. As a young Army wife, she volunteered for the American Red Cross in the 1980s and constantly hosted cadets from the United States Military Academy at their home in the early 1990s. She was also an official West Point tour guide, teaching curious visitors about the Academy and life in the military. During Jeff’s company, battalion, and brigade commands, Julie led the unit’s Family Readiness groups, creating a climate where families felt cared for and supported. Her efforts led to her being inducted into the Honorable Order of Molly Pitcher and commissioned as a Yellow Rose of Texas by Governor Rick Perry in 2006 for her exceptional community service work. After Jeff retired from the Army, Julie continued to serve by making quilts for soldiers wounded in Iraq and Afghanistan. She also worked for 3 years at Joann, the fabric and craft retail store, helping crafters bring their various projects to life.

An animal lover, Julie’s childhood home was constantly filled with cats and dogs. As a mother, Julie couldn’t resist her children’s requests for cats, so the family moved to and from Germany three times with two cats in tow.

Julie especially loved stories and watching movies with her family. As a mother, she was an understated feminist who exposed her daughters to strong, vibrant women through books, shows, songs, paintings, movies and plays; championing women’s equality through examples of feminine strength. She kept a framed copy of Norman Rockwell’s print Marble Champion, which now hangs in her quilting room, as a reminder that skill and talent are acquired by practice, not gender.

Julie was a beacon of light and love for all that knew her. Known for her quiet friendliness and kindness, she opened her home and broke bread with friends from different racial, religious, and socioeconomical backgrounds. She shunned disagreements and never forced her opinion or values on others. She found fulfillment being a wife and mother, documenting her life in planners she kept since college, a living record and testament to a life focused on caring for her family and enjoying each day. Never without a smile, she was the epitome of happiness.

Julie was especially proud of her daughters. From their service to the nation and their communities, to their work on the frontlines of the pandemic, Julie was proud that her daughters became strong independent women.

But Julie’s greatest joy in life was being married to Jeff for 41 years. From their two bedroom apartment in Fullerton to their home in Lansing, Julie loved waking up and falling asleep besides Jeff. During their times apart, the two often wrote each other love letters, signing off that they loved each other so much, it hurt. The couple especially enjoyed traveling all over the US and the world with their children-visiting Canada, England, Spain, France, Austria, Italy, the Czech Republic, Poland, Turkey, and Greece-but also found joy in traveling across the US together as a retired couple. Whether renting an RV or riding around in Jeff’s truck, Julie was always happy, so long as she was by Jeff’s side.

She was preceded in death by her father, Verlin Bocker.

To send flowers to the family or plant a tree in memory of Julie Oeser, please visit our Heartfelt Sympathies Store.

Receive notifications about information and event scheduling for Julie

There are no events scheduled. You can still show your support by sending flowers directly to the family, or planting a memorial tree in memory of Julie Oeser.
Visit the Heartfelt Sympathies Store

We encourage you to share your most beloved memories of Julie here, so that the family and other loved ones can always see it. You can upload cherished photographs, or share your favorite stories, and can even comment on those shared by others. 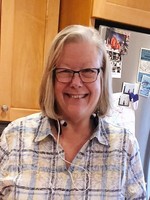