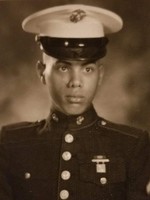 Upon graduating from high school, Wilmer enlisted in the United States Marine Corps, in which he was Honorably Discharged. Wilmer was one of the most generous people, had a sense of humor out of this world and there was nothing he wouldn’t have done for anyone.

He was preceded in death by his parents as well as two brothers, Michael and Johnnie Wilson, Jr.; and one sister, Brenda Shah.

The family wishes to express sincere thanks to family and friends who comforted us during this time of sorrow. A very special thanks to Good Shepherd Hospice for showing love, compassion and dignity in Wilmer’s last days.

A graveside service with military honors will be Thursday, February 13, 2020, at Leavenworth National Cemetery.