To share your memory on the wall of Thomas Wacker, sign in using one of the following options:

He grew up in Leavenworth and graduated from Leavenworth High School in 1983 where he was involved in ROTC. Tom worked for almost 20 years at the Lansing Correctional Facility and later found great enjoyment working for Pizza Hut, where he had the opportunity to meet many different people.

Tom was a lifelong sports fan, but he was especially a fan of football and the Kansas City Chiefs.

He had a passion for reading, especially books pertaining to history. He loved spending time with his friends either fishing or playing video games.

Tom was preceded in death by his parents, James in 2011 and Barbara in 2012. He is survived by his brothers Dennis (Terrie) Wacker of Lansing, Kan., and David (Missy) Wacker of Leavenworth, Kan.; two nephews, Jason Wacker and Christopher Wacker; his step-mother, Barbara Wacker; step-siblings, Craig Theis and Susan (Theis) Neef.

To send flowers to the family or plant a tree in memory of Thomas Wacker, please visit our Heartfelt Sympathies Store.

Receive notifications about information and event scheduling for Thomas

We encourage you to share your most beloved memories of Thomas here, so that the family and other loved ones can always see it. You can upload cherished photographs, or share your favorite stories, and can even comment on those shared by others. 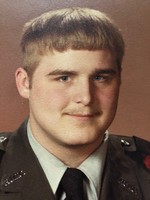