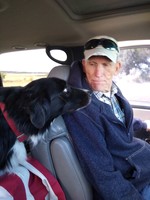 Thomas proudly served in the US Air Force from 1961-1965 as a heavy equipment operator, serving most of his tour of duty in Anchorage Alaska plowing snow and other such work. He was there during the historic earthquake of 1964 and enjoyed telling stories of that event, as well as leaving the service by way of a long road trip down the unpaved AlCan Hwy with a pregnant wife and pregnant cat, mustering out in Montana. His other favorite memory was of his time serving at Richards Gebauer AF Base in Kansas City, and being chauffeur for both Margaret Truman and Astronaut Gus Grissom. After working as an automotive mechanic in Kansas City for many years, he had a long career in power line right-of-way and substation maintenance with Southwestern Power Administration, Dept of Energy, retiring in 2005.

Tom made his profession of faith in Christ Jesus on October 30, 1991 and was baptized with his daughter Katie in Flat Creek at McDowell, MO. This was the most significant event in his life, and his new life in Christ, walking with and serving his Savior was the most important part of his life. He was currently a member of the Open Door Fellowship in Basehor, KS.

Tom had a servant heart and loved to serve others in any way possible. He served as President of the Board of the Heritage Harmony House Senior Center in Aurora MO after serving as a volunteer there for several years. Currently, Tom was a dedicated volunteer at the Council on Aging Nutrition Program at Trinity Lutheran Church in Leavenworth.

Tom was an avid hunter and fisherman starting from his childhood. He was a dedicated, lifetime member of the National Rifle Association and enjoyed shooting trap and skeet, restoring antique firearms and gunsmithing. He loved and exceled at working on anything mechanical, especially automotive; he spent countless hours helping anyone who had a need with car repair issues right up to his death. He especially loved spoiling and spending time with his grandchildren. He also loved animals of every kind and found great satisfaction during his years as a “cattle baron” on his 40-acre hobby farm in SW Missouri, He raised beef cows and over the years housed an assortment of other livestock for his children's pleasure and FFA projects including horses, sheep, pigs, chickens, ducks and geese, assorted cats and dogs, and a borrowed llama which resulted in his temporary nickname of Tommy Llama. Most especially, he loved his dogs, leaving behind him Max, Lady and Bridget.