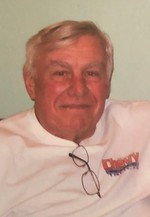 He was an iron worker with Local 10 for 24 years. Richard held positions from Foreman to Superintendent. Once retired, he enjoyed working on cars in his garage and was an active member of the Leavenworth Cruisers since 2006. Richard was President for one year, Vice President for two years and Sergeant at Arms for three years. He loved his cars and the friends around him.

Richard was a long-time member of the Leavenworth Kiwanis, serving as President and Vice President. While a member he received the George F. Hixson award and Kiwanian of the year.

He was preceded in death by his parents; a step-mother, Annette Patzwald; his wife, Pamela G. Patzwald; a daughter, Tishe Mcfadden; a brother, Gary Patzwald; and a sister, Patsy Beaman.

Visitation will be from 2 to 4 p.m. Sunday, Sept. 20, 2020, at the R.L. Leintz Funeral Home. A funeral service will begin at 11 a.m. Monday, at the funeral home. Burial will follow at Sunset Memory Gardens Cemetery. Memorials are suggested to the Leavenworth Cruisers. Masks will be required.