To share your memory on the wall of Richard Heim, sign in using one of the following options:

He graduated from Immaculata High School ... Read More
Richard Eugene Heim, 76, of Easton, Kan, died Saturday, Aug. 15, 2020, at his home surrounded by his family. He was born Jan. 2, 1944, in Leavenworth, the son of Harold and Martha (Bromell) Heim.

He graduated from Immaculata High School in 1962.

Richard had a great love of land and he was a lifelong farmer. He retired from dairy farming in 2011 and was then able to farm with his five sons up until his death.

He was preceded in death by his parents.

Richard was an active member of St. Joseph of the Valley Catholic Church, where he served on the church council. He was an avid KU Jayhawks fan, and he enjoyed trapshooting and hunting in his younger days. Richards favorite pastime was watching each of his grandchildren play sports. He took pride in Lake Stella Maris meaning “Star of the Sea” that he and his brother owned and operated together. Richard was known for his kindness and humility and will be greatly missed.

Visitation beginning with the rosary will be from 4 to 8 p.m. Wednesday, Aug. 19, 2020, at St. Joseph of The Valley Church. Masks will be required inside the church. Mass of Christian burial will be private followed by a public burial at 11 a.m. Thursday, Aug. 20, 2020, at Mt. Olivet Cemetery. Memorials are suggested to St. Joseph of The Valley - St. Lawrence Parish or KU Cancer Center.
Read Less

To send flowers to the family or plant a tree in memory of Richard Heim, please visit our Heartfelt Sympathies Store.

Receive notifications about information and event scheduling for Richard

We encourage you to share your most beloved memories of Richard here, so that the family and other loved ones can always see it. You can upload cherished photographs, or share your favorite stories, and can even comment on those shared by others.

Lewis and Marilyn Culbertson and Matthew, April, Madison and Nathaniel Herken sent flowers to the family of Richard Heim.
Show you care by sending flowers

Posted Aug 19, 2020 at 11:55am
Our condolences to such a wonderful and loving family. - Garth Saunders and Amy Speer

Blooming Garden Basket was purchased for the family of Richard Heim. Send Flowers 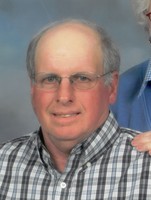