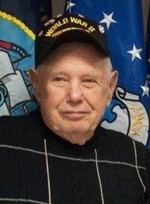 Peter “Pete” Jacob Derezinski, 94, of Leavenworth, passed away peacefully surrounded by family, Friday July 17, 2020, at Country Care in Easton, Kan. He was born Sept. 11, 1925, in Leavenworth, the son of James and Rosie (Kowalski) Derezinski, both were decedents from Poland.

Pete served in the United States Army during WWII from 1943 to 1946 as a combat engineer. He later worked at Abernathy Furniture Co., Kramer Manufacturing where they made special parts for space shuttles and Missouri Valley Shipyards. He was also employed at Lansing School District as a custodian.

On Dec. 31, 1946, Pete married Gertrude “Gertie” Ramey. She preceded him in death in 2010. He was also preceded in death by his parents; two infant daughters, Patricia, and Deborah; two sisters, Dorothy Madison and Cecilia Scherer; and a grandson, Cpl. David Unger (KIA IRAQ); and numerous other beloved family members.

He was a great bowler, bowling several 300 games. Pete enjoyed playing softball, fishing at the Delaware River or Stranger Creek, going to the Casino and anything sweet, especially chocolate. He always put his family first and loved spending time with each and every one of them.

Visitation will be from 6 to 8 p.m. Monday, July 20, 2020, at the R.L. Leintz Funeral Home. A funeral service will begin at 11 a.m. Tuesday, at the funeral home. Burial will follow at Sunset Memory Gardens Cemetery. Memorials are suggested to Country Care of Easton or Good Shepherd Hospice.