To share your memory on the wall of Mildred Adams, sign in using one of the following options:

She attended Ouigley, Eureka, and Waterman country schools, Gentry High School and graduated from Albany High School in 1939. Milly then attended Maryville State Teacher’s College for 2 years in winters, and Bolivar Baptist College during the summers and obtained a teaching certificate. She taught school at Victor School (a one-room schoolhouse) and Canadey Country School.

On August 13, 1942, Milly married the love of her life, William Vincent Adams, who had just qualified as a pilot in the Army Air Corps. She followed him where she could during the war years and after the war, when the U. S. Air Force was established, he joined as an officer. During the next 32 years, Milly accompanied Vincent around the country as an Air Force wife, living in 12 states and countries and moving 26 times. They has four children, which she raised to the best of her ability to be honorable adults who knew the Lord. She involved herself and her children in school and church activities, sports and scouting, as well as family camping, boating, biking and yearly vacations.

Milly and Vincent retired to a small acreage in Leavenworth, Kan. where they continued to serve others in their church and community. Milly canned hundreds of quarts of fruits and vegetables, and raised beautiful roses and other flowers. She was always generous to share what she had.

She and her husband were married for 72 years before he passed away in 2015. Milly was also preceded in death by her parents, Frank and Dana (Snyder) Henderson; her sister, Imogene Williams; and two infant children.

Milly moved to St. Joseph to Country Squire Assisted Living at the age of 93, to be closer to her children. She is survived by four children; Tom (Pam) Adams of Houston, Texas, Meta (Carl) Sampsel of Clarksdale, Rick (Penney) Adams of Amazonia, Mo. and Terry (Cheryl) Adams of St. Joseph; 12 grandchildren; 27 great-grandchildren; and one great-great grandchild.

Visitation will be from 10 to 11 a.m. Thursday, Jan. 14, 2021, at the R.L. Leintz Funeral Home. A funeral service will begin at 11 a.m. Thursday, at the funeral home. Interment will follow at 12:30 p.m. at Leavenworth National Cemetery, where she will be buried with her husband. Flowers are welcome and memorial donations are suggested to Meals and Wheels.
Read Less

To send flowers to the family or plant a tree in memory of Mildred Adams, please visit our Heartfelt Sympathies Store.

Receive notifications about information and event scheduling for Mildred

We encourage you to share your most beloved memories of Mildred here, so that the family and other loved ones can always see it. You can upload cherished photographs, or share your favorite stories, and can even comment on those shared by others.

Posted Jan 14, 2021 at 12:14pm
Meta, So sorry to learn of your mother's death. Please know that I am thinking of you and your family at this time. I know she meant a lot to you. Linda Blank
Comment Share
Share via: 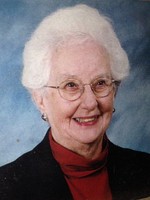