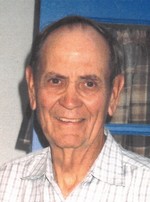 Leo served in the United States Army Air Corps from 1945 to 1947. He was employed with GSA for the Federal Government for 27 years and he also worked for the Easton Bus Service for another 27 years serving the Basehor School District.

He was a member of Holy Angels Catholic Church for over 53 years. Leo was also a member of the VFW Post 11499 in Basehor, Kan.

Leo was preceded in death by his parents; a brother, Lawrence Kreutzer; and a daughter, Joan Kreutzer.