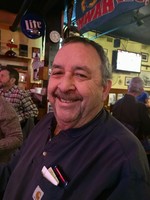 Joseph was preceded in death by his parents and his wife, Nicolet Bernard.

He was a pipefitter for Pipefitters Local #533 for almost 40 years.