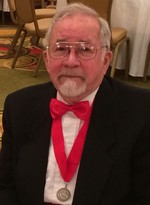 John served his country in both the Army and Air Force. He initially served in the Air Force during the Korean War and then served in the Army as a Field Artilleryman and a Green Beret. He served tours in Vietnam, Germany and throughout the continental US. He retired in 1980 as a Colonel. John’s civilian career was that of a history teacher in Virginia Beach, Va. He moved back to Leavenworth after retiring from teaching. John’s interests included hunting, fishing and wood carving - specifically birds and ducks.

He is preceded in death by his parents and his wife, Martha.

He will be inurned at Leavenworth National Cemetery with his wife 10 a.m., Friday, October 2, 2020. Arrangements in care of R.L. Leintz Funeral Home.