To share your memory on the wall of Herbert Cason, sign in using one of the following options:

He was preceded in death by his parents; two brothers Ivan Cason and Jerry Lewis; and a
Granddaughter, Zariah Cason.

He enlisted in the United States Air Force in 1969 and retired from the Air Force in 1989. Herbert also retired at Hallmark Cards in Leavenworth Kan. after 23 years.

Herbert was an avid hunter and fisherman. He enjoyed dominos, bid whist, The Temptations, old
school soul and gospel music. He was the biggest fan of The Oakland (Las Vegas) Raiders
football!

Services will be private. Herbert will be laid to rest at Leavenworth National Cemetery. Arrangements in care of R.L. Leintz Funeral Home.
Read Less

To send flowers to the family or plant a tree in memory of Herbert Cason, please visit our Heartfelt Sympathies Store.

Receive notifications about information and event scheduling for Herbert

There are no events scheduled. You can still show your support by sending flowers directly to the family, or planting a memorial tree in memory of Herbert Cason.
Visit the Heartfelt Sympathies Store

We encourage you to share your most beloved memories of Herbert here, so that the family and other loved ones can always see it. You can upload cherished photographs, or share your favorite stories, and can even comment on those shared by others.

Akilah Philpot -AKP, Sandra Duffin and Daughters, and other have sent flowers to the family of Herbert Cason.
Show you care by sending flowers

Posted May 14, 2020 at 08:35pm
I'm glad to get to know Herb working with him at Hallmark such a fun loving person to know always had you laughing my sincere thoughts and Prayers are with the Family Randy Fields
Comment Share
Share via:
V

Having the privilege of working with Herb at Hallmark Cards was a great experience, he was doing kind things here, saying nice things there, sharing his faith and love everywhere he went, to the Saturday nights and early Sunday morning playing Dominoes and cards . Wherever he was, most likely you will find food. To the family hold on to God's unchanging hands. Your loved one has left a beautiful legacy that will always live on in you and your family. RIP my brother. Vallaire Robinson and family
A-

Posted May 14, 2020 at 07:00pm
Alina, Im praying for strength, peace, and the comfort God promises to provide during these times. Keeping you and your family lifted in love.

Posted May 14, 2020 at 12:46pm
With much love and deepest sympathy to the Family of Herbert Cason. May he rest in our Lord God's eternal peace. In God's Love,

Posted May 14, 2020 at 01:40am
Pat, with love, good memories and best wishes, I send my heartfelt sympathy to you and your family. Rick Hill 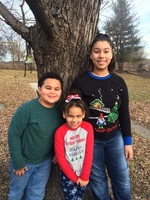