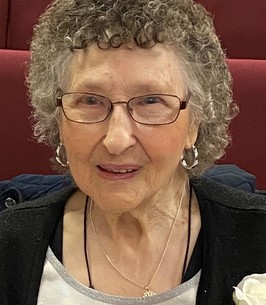 She was preceded in death by her husband, Marion F. Shoemaker; her parents, Clarence and Rose Weaver; a stepmother, Roberta Weaver; a brother, Russell Weaver; and a son, Edward James.

She was not only a courageous mom of seven beautiful children, she was also an amazing and loving grandma to 16 grandkids, 24 great grandkids and nine great-great grandkids.

Born during the Great Depression, Helen was moved from Grand Pass and raised in Waverly, Missouri. She married Edward James, and they had six children. They later divorced and Helen married Marion F. Shoemaker on August 7, 1965. They had one son, George Allen. The family moved to Leavenworth, Kansas in December of 1969, where she enjoyed her employment at Harris Bros Cleaners from 1970-1971. Later in 1971, she started her career at the Leavenworth V.A. Medical Center as a food service worker until retiring in January of 1996 with 25 years of service.

Since her retirement, Helen assisted in raising many of her grandchildren. While spending time with them she enjoyed teaching them many arts and crafts, especially needlework, latch-hook and puzzles. Helen was a lover of nature, and in her free time enjoyed gardening, reading and watching her Hallmark Movies!

After 89 long years of life, Helen passed away peacefully surrounded by her loving family.

Visitation will be from 2 to 3 p.m. Saturday, March 19, 2022, at the R.L. Leintz Funeral Home. A memorial service will begin at 3 p.m. Saturday, at the funeral home. The family suggests memorials to The National Kidney Foundation and The American Heart Association.