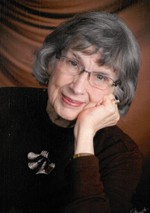 Marlene spent most of her childhood in Oklahoma. She attended high school in Oakwood, Okla., and graduated in Olustee, Okla. in 1953. She received her bachelor’s degree in Education from Oklahoma State University in 1956, and her master’s from the University of Northern Iowa in 1984. She taught in two Iowa schools and worked as an interviewer for the Iowa State Employment Service.

In 1955, Marlene married William A. Best and was later re-married to Herbert H. Watson in 1974. They were married for 34 years and enjoyed traveling the world together. He preceded her in death in 2008. She was also preceded in death by a sister, Mary Phyllis Carpenter; a brother, Francis Carpenter; and a stepchild, Byrna Kimberlin.

Marlene was an outgoing and loving person. She had a great love for God’s creation, a warm heart for everyone she met and a tender heart for people in need. She loved God, people, reading, swimming, and nature. Marlene was a true model of unconditional love, forgiveness and joy to her family and friends.

A private family memorial service at R.L. Leintz Funeral Home in Leavenworth, Kan., is planned, with a burial in Bridgeport, Okla., at a later date. In lieu of flowers memorial gifts may be directed to Nature Conservancy in Topeka, KS or Good Shepherd Hospice in Lenexa, KS.