To share your memory on the wall of Glenn Linaweaver, sign in using one of the following options:

Glenn leaves behind a legacy. He is a published author of his book titled, "My First Eighteen Years in Lansing, Kansas", Glenn stated, his family was far from wealthy; they had to grow their own food or hunt for it. It was the end of the Depression and the beginning of World War II rationing; many things were hard to come by. He remembers the whole community being "in the same class," working hard and knowing each other.

Glenn graduated from Lansing High School and went on to study Industrial Arts at Kansas State University. Glenn played football for the Wildcats his freshman year and when asked to move to varsity he said no because they were way bigger than he was but continued to study. He left KSU when his degree was changing from Industrial Arts to becoming a shop teacher. He knew he was not going to be a teacher. After having several jobs and working at Longbell and Kaaz Construction, he took an interview with the George Will Company in Kansas City, Mo. Glenn began working for George Will in 1966 and shortly after he and another employee bought the company from George Will. They owned the company until deciding to retire and closed down the company in December 2006. He was a member of Bethel Baptist Church for many years.

He loved sports, he especially enjoyed watching and attending the KC Royals and KC Chiefs where he was a season ticket holder for many years, and the KSU Wildcats. Traveling was such an enjoyment for Glenn. If he wasn't traveling with his late wife Sally, he was taking both of his daughters and their families to KSU bowl games, basketball games, Royals games and most recently in 2019, he took everyone to Maui where he spent most of the days golfing. His favorite trips with his late wife were to Alaska and Australia. He bowled for the Eagles Aerie #55 league for over 50+ years. Glenn and his family became members of the Leavenworth Country Club in 1971. He spent his free time golfing with his friends and family and he even established The Little Big Boy's Golf League in 1992, which still continues today.

Glenn Leo is preceded in death by his parents; his wife of almost 52 years, Priscilla “Sally”; a brother, Jerry (Betty), and a brother-in-law, Terry Rush.

He is survived by his daughters, Vickie (Paul) Clipston and Sally (Jim) Nelson; Glenn had six grandchildren, Alyshia, Ashly, Joshua Clipston and Bryan (Stephanie), McKenzie and Matthew Nelson ; a great-granddaughter, Harper Marie; and a sister, Sue Rush.
Visitation will be from 5 to 8 p.m. Friday, Aug. 21, 2020, at the R.L. Leintz Funeral Home. A funeral service will begin at 10 a.m. Saturday, at the funeral home. Burial will follow at Sunset Memory Gardens Cemetery. In lieu of flowers donations can be made to St. Jude Children's Hospital or the Wounded Warrior Project. Mask are not required but are encouraged.
Read Less

To send flowers to the family or plant a tree in memory of Glenn Linaweaver, please visit our Heartfelt Sympathies Store.

Receive notifications about information and event scheduling for Glenn

We encourage you to share your most beloved memories of Glenn here, so that the family and other loved ones can always see it. You can upload cherished photographs, or share your favorite stories, and can even comment on those shared by others.

Posted Aug 21, 2020 at 07:03pm
We are so sorry that Glenn is gone. I enjoyed waving at him or visiting with him when he was in his black truck on Rock Creek Loop. He was a good neighbor and went through a lot with the loss of Sally and his health in recent years. It is an empty feeling to look over at his house and know he is not there. The rejoice is that he is now with Sally and his suffering is over. In Deepest Sympathy to his two daughters and family.
Bill and Lori Mason
128 Rock Creek Loop
Comment Share
Share via:
A

Posted Aug 21, 2020 at 05:20pm
Great friend lots of early ventures during my high school life. Great entrepreneur and all around good guy! We will miss you.

Posted Aug 20, 2020 at 01:28pm
Sally and Jim, and family, please accept my condolence for your loss. Throughout my 36 year career with Midwest Acoustics I had the pleasure of many phone conversations, meals and visits with Glenn. From George Will Company to his very short time with us at Midwest Acoustics Glenn always shared his vast knowledge of the trade and had many good stories to tell. He was truly the embodiment of a 'friendly competitor'. I fondly remember recent years of his visits to our office to 'stop and say hello' and depending who was present at the time, Dan, George, Pattie, Laurie, Eric, or others, we'd all spend time together reminiscing.
Thomas M. Smith
Comment Share
Share via:
KT

Posted Aug 19, 2020 at 07:31pm
Glenn was a kind, caring man. He was also known for being a jokester. He loved his family very much. He especially loved his two wonderful daughters who meant the world to him. He loved to travel, play golf, bet online dog races, and hear about his grandchildren lives. He will be missed .
Comment Share
Share via: 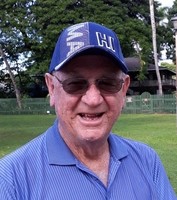