To share your memory on the wall of Francis Kukuk, sign in using one of the following options:

In December 1949, Francis married Sara Mills. She preceded him in death in 1973. He was also preceded in death by his parentsl a brother, Bill Kukuk; and a Sister Anita Ella James.

Frank loved telling stories of his life as a child; helping his mother milk the cows before school, carrying his sister to school on his shoulders, working with his father for the Santa Fe Railroad when he was 15 breaking up rock, laying track and often flagging down trains when men were working on the tracks; assisting farmers by gathering hay and bringing in the cows for milking.

He joined the Navy following graduation from High School and served on a mine sweeper in the Pacific during the remainder of WWII. He served in the Reserves the following 10 years.

Francis attended Emporia State University receiving a bachelor’s degree in education. Over the years he continued his education and obtained a Master’s Degree. He taught and coached in a number of schools in Kansas working his way up through the various positions until he was hired as Assistant Superintendent of the Leavenworth School System in 1968. One of his first duties was to hire teachers for the newly constructed West Junior High School. He hired a total of 72 teachers over a period of two years to fill many positions in the School System. He became Superintendent in 1970.

In 1978 he took a position as Administrator for the International School of Bangkok Thailand, serving three years before returning to the States. In 1983 he accepted a position in Monterrey, Mexico as the Director of the American School Foundation of Monterrey.When he returned to Leavenworth, he was the Principal of David Brewer school until his retirement in 1988.

He loved working with Ft. Leavenworth and the Officer Exchange program. He met many of the officers that were in School here in Leavenworth in Asia and enjoyed telling about his experiences with the various individuals and their countries.

Francis was very active in many of the Civic Clubs in Leavenworth. In his later years, he was on the Board of Directors and active at The Heritage Center. He was responsible for obtaining Emporia State University as a renter at the Center. He also enjoyed visiting with the folks who attended the various activities, games and the musical programs at the Center.

To send flowers to the family or plant a tree in memory of Francis Kukuk, please visit our Heartfelt Sympathies Store.

Receive notifications about information and event scheduling for Francis

There are no events scheduled. You can still show your support by sending flowers directly to the family, or planting a memorial tree in memory of Francis Kukuk.
Visit the Heartfelt Sympathies Store

We encourage you to share your most beloved memories of Francis here, so that the family and other loved ones can always see it. You can upload cherished photographs, or share your favorite stories, and can even comment on those shared by others.

Posted Oct 27, 2020 at 01:24pm
Scotty - Mom and I are so very sorry for your loss. Please know we are keeping you and Francis' family in our prayers.
Comment Share
Share via:
KR

Posted Oct 26, 2020 at 02:36pm
Frank, It was a pleasure to know you and to work with you over the years. It started when I was hired as the SAI at Leavenworth, includes the times we were Principals together, and has ended with our relationship at the Heritage Center and at LARSPA. You were a good man and a good educator. I offer my condolences to Scottie and the rest of the family. Robert H Van Horn
Comment Share
Share via:
JB

Posted Oct 23, 2020 at 03:48am
I never knew about Frank's career in education or that he was a WWII vet just as my daddy was for 5 years in the Navy serving on destroyers!! What a lovely tribute to a fine human being!! I remember he used to live in what is now your quilting studio!! Great memories coming to your home and having fun as parents together with the Stars boys. You had a wonderful father Rod but, you already know that!! Rest in peace dear Frank!! God's got you now sweet man!!
Comment Share
Share via: 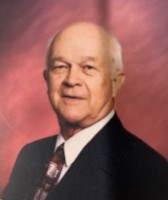