To share your memory on the wall of Frances Rogers, sign in using one of the following options:

On Jan. 15, 1947, Frances married Robert “Shorty” Rogers. He preceded her in death October of 2011. She was also preceded in death by her parents; a brother, Fritz Ross; and a sister, Amanda Hunt.

She worked for seven years at Hallmark Cards and 10 years at Inkman Food Center. Frances volunteered at the Leavenworth County Assistant Center as a quilter for 12 years. She was a member at Southern Heights United Methodist Church for over 40 years. She was also a member of First United Methodist Church for over 20 years, where she was active in the Martha Circle and worked on the chicken noodle dinner for years. She received the Methodist Woman of the Year Award in 2011. She was also a member of the Eagles React

Frances enjoyed playing games at the Council on Aging and Cards at the Heritage Center. She showed her love for people by baking them pies and sewing them quilts.

A graveside service will be at 10 a.m. Thursday, Oct. 1, 2020, at Mt. Muncie Cemetery. Friends may leave cards and sign her guestbook anytime Wednesday, Sept. 30, 2020, from 8 a.m. to 4 p.m. at the R.L. Leintz Funeral Home. Memorials are suggested to First United Methodist Church or Council on Aging.
Read Less

To send flowers to the family or plant a tree in memory of Frances Rogers, please visit our Heartfelt Sympathies Store.

Receive notifications about information and event scheduling for Frances

We encourage you to share your most beloved memories of Frances here, so that the family and other loved ones can always see it. You can upload cherished photographs, or share your favorite stories, and can even comment on those shared by others.

Posted Sep 30, 2020 at 01:14pm
Please accept our most heartfelt sympathies for your loss. Our thoughts are with you and your family during this difficult time. We will miss Frances.

Flowers were purchased for the family of Frances Rogers. Send Flowers

Posted Sep 29, 2020 at 10:03pm
Frances and Shorty were very good friends with my mom and dad. She was a beautiful lady inside and out. So sorry for you loss.
The Ed McClure family

Posted Sep 29, 2020 at 11:48am
Please know that you are all in thoughts and prayers. Frances was such a wonderful person and always had a smile on her face. I have fond memories of her in the community and growing up in the Methodist church were she and Shorty were members. I hope you find continued joy in your memories of the years you had with her, as we will.
Kathleen Mulvaney and Kelly Mulvaney
Comment Share
Share via:
E

Posted Sep 29, 2020 at 12:26am
Rick, we are so sorry for your loss. Know you and your family are in our thoughts and prayers
Comment Share
Share via: 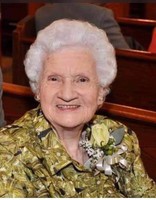