To share your memory on the wall of Earl Bechtold, sign in using one of the following options:

As a young boy, Earls’ passion was baseball. He spent his days at the Little League park with his teammates and friends. All this hard work and dedication was rewarded when his team went on to play in the Little League World Series in Williamsport, Pa in 1955. He graduated from Pittston High School in 1960 as president of his class and co-captain of the football and baseball teams. Earl went on to attend the University of Scranton in 1964 where he was a member of ROTC program beginning his long career in the Army.

In the same year of 1960 Father Hannigan introduced Earl to Peggy Bilbow changing their live forever. The two married on July 30th, 1966 after which he was commissioned in the US Army and assigned to the 82nd Airborne Division All American at Fort Bragg, NC. It was here their first of four children was born, Chip. In early 1968 Peggy moved back to Pittston while Earl served in Vietnam. In July of 1968 their second child Mara was born. Another son, Mark, was born in Pittsburg in October 1969. Daughter Megan was born in 1973 at Fort Knox, KY. Earl and Peggy raised their children embracing love and the proving the importance of faith and family. After 23 years of service, Earl retired at Fort Leavenworth, KS. as a decorated Lieutenant Colonel. After retirement he worked for Northrop Grumman for 23 years. Earl always said he would work until he died and he did.

It has been said that if you receive the great joys of life you are to receive great sorrow. The Bechtold family experienced the loss of their beloved Chip, and years later, their dear Mara. They drew on their faith to strengthen one another through these difficult times.

While his family will miss him dearly, they will continue to celebrate Earl’s life with the joy and happiness he would want. He loved family vacations to Tybee Island, GA, singing in the Sacred Heart choir, attending daily mass, Sunday night dinners with family, and he was a true storyteller always making an impression on everyone he met. Earl was a good husband, father, son, and friend. “Earl you are very good at everything you do especially at being a friend”-quote from a letter sent by childhood friend Sam Polit.

A visitation will begin at 2 pm Wednesday, with family present from 5 to 8 pm July 29th, 2020, with Rosary prayed at 7:30pm., at R.L. Leintz Funeral Home. Mass of Christian Burial will begin at 11am Thursday, at Sacred Heart Catholic Church. Burial will follow as Sacred Heart Kickapoo Cemetery. Due to Covid restrictions please wear a mask and practice social distancing.

Donations in Earl’s memory are welcomed in the name of Leavenworth Catholic Schools.
Read Less

To send flowers to the family or plant a tree in memory of Earl Bechtold, please visit our Heartfelt Sympathies Store.

Receive notifications about information and event scheduling for Earl

We encourage you to share your most beloved memories of Earl here, so that the family and other loved ones can always see it. You can upload cherished photographs, or share your favorite stories, and can even comment on those shared by others.

staff and residents at Lansing Care, Ryan and Carol Markle, and other have sent flowers to the family of Earl Bechtold.
Show you care by sending flowers

Posted Aug 05, 2020 at 06:46pm
My deepest sympathy and condolences to the Earl Bechtold Family. Earl was one of the finest gentleman, warrior, scholar and patriot you could find. He was always very positive, upbeat, and generous. His spirit, grace, and humor will be greatly missed. Mike Rugani
Comment Share
Share via:
RF

Posted Jul 31, 2020 at 11:06am
My deepest condolences to the Bechtold family, and to all those who were close to Earl.

Earl was my first supervisor when I joined Northrop Grumman in September, 2000. He became my mentor and true friend. He was quick to offer assistance whenever and wherever it was needed. His smile and laugh were always present.

The world is a lesser place as a result of his passing. There is a void that can be filled only by memories.

It is my firm belief and conviction that Earl is now safely cradled in the arms of an ever-loving God.

Flowers were purchased for the family of Earl Bechtold. Send Flowers

Posted Jul 29, 2020 at 06:13pm
I have known Earl for many years especially through Megan's tenure and my son Alan's tenure in high school. They made the sports page many times and we became known to each other then as "Megan's Dad" and "Alan's Dad" not Earl and Chet. And although we spent many years working at Northrop Grumman, he on the Blue side and me on the Red side, we were always Megan's Dad and Alan's Dad. I will miss him dearly. A true Family man, a Christian man, a Patriot, and wonderful friend. God Bless you all in this time of loss. Chet Dubberley
Comment Share
Share via:
MB 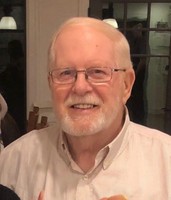