To share your memory on the wall of Dorothy McCarley, sign in using one of the following options:

After graduating from Lutheran School of Nursing in 1950, Dorothy... Read More
Dorothy Mae McCarley, 92, of Leavenworth, passed away, March 14, 2020. She was born Jan. 29, 1928, in Cleveland, Ohio to the late Charles and Franciska (Sincovits) Petrie.

After graduating from Lutheran School of Nursing in 1950, Dorothy began her forty-five year career as a surgical Nurse in Cleveland.

Two years into her career and during the Korean War, Dorothy met and married Norman McCarley, a Marine Corps Sergeant. He preceded her in death. She was also preceded in death by her parents; a brother, Charles Petrie; a sister, Dolly (Petrie) Platten; and a granddaughter, Amanda Kay (Hannon) Hopkins.

Dorothy’s passions included her nursing career, traveling to visit her daughters military centered family wherever they were stationed, reading many books, enjoying classical, military and big band era music, shopping and eating at her favorite places. She enjoyed spending time with her grandchildren and later in life, her great grandchildren. Dorothy was particularly fond of dogs, she had many dogs growing up and was close to of all her daughters dogs.

She is survived by her only daughter, Lora (McCarley) Hannon and her son-in-law, Francis Michael Hannon; two grandsons, Daniel and Joshua Hannon; two great-grandchildren, Delaney Maxwell and James Hopkins; as well as several nieces, nephews and great nieces and nephews.

Dorothy believed whole heartedly in God and Country. She was a staunch supporter of our military and especially proud of all our family members who served honorably. Although Dorothy was a private person, her kind and caring ways were always at the heart of her personality, however she was still feisty and had a heart like a lion and a will like an iron.

The Hannon family would like to recognize VITAS Hospice Care with our deepest appreciation for three years of outstanding service to Dorothy. We thank them for always going above and beyond expectations, bringing with them positive attitudes, warm smiles, expertise and professionalism.

A memorial service will begin at 11 a.m. Saturday, May 30, 2020, at the R.L. Leintz Funeral Home. Inurnment will follow at Mt. Calvary Cemetery.
Read Less

To send flowers to the family or plant a tree in memory of Dorothy McCarley, please visit our Heartfelt Sympathies Store.

Receive notifications about information and event scheduling for Dorothy

There are no events scheduled. You can still show your support by sending flowers directly to the family, or planting a memorial tree in memory of Dorothy McCarley.
Visit the Heartfelt Sympathies Store

We encourage you to share your most beloved memories of Dorothy here, so that the family and other loved ones can always see it. You can upload cherished photographs, or share your favorite stories, and can even comment on those shared by others. 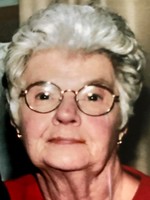