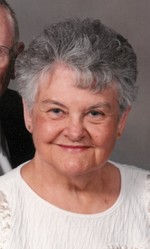 In 1946, she married Herman Ledet and relocated to Louisiana where she lived until they divorced in 1952, after which she returned to Kansas City.

On April 28, 1956, she married Elmer Wayne Bailey Jr. He preceded her in death. She was also preceded in death by two sons, Blair Ledet and Herman Ledet Jr.; and two sisters, Nancy Kiser and Judy Benn.

She is survived by a son, Jessie Ledet, and daughter-in-law, Wendy Ledet of Thibodaux, La.

Donna was employed for over 30 years at Fort Leavenworth where she worked as administrative officer for the Data Processing Field Office and later as a training manual editor at the Command and General Staff College in Bell Hall.

Following her civil service career, she was an agent at Leavenworth Travel. During that time, she and her husband traveled to Europe, Australia, Panama, Mexico, many Caribbean islands, Hawaii and Alaska. After finally retiring, she and her husband wintered in Arizona until his health failed.

She was a member of First Christian Church. Previously, she was a member of, and church organist for, Wilson Avenue Baptist Church. For many years she was an active member of the Greater Kansas City Organ Club. She was an excellent cook, enjoyed various crafts, and was an avid fan of both the Royals and the Chiefs.

Visitation will be from 10 a.m. to 12 p.m. Wednesday, Oct. 14, 2020, at the R.L. Leintz Funeral Home. A memorial service will begin at 12 p.m., Wednesday, at the funeral home. Memorials are suggested to First Christian Church.