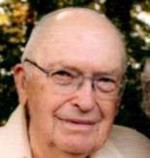 While growing up Dewey worked on the family wheat farm and registered Angus Ranch. He graduated from Burr Oak High School in 1952. On February 14, 1954 he married Donna R. Pittam in Superior, Neb.

Dewey had a lifelong love of animals. He graduated from Kansas State University with two degrees, the Bachelor of Science, and in 1963 the Doctor of Veterinary Medicine.

He started a veterinary practice in Leavenworth, Kansas and practiced 30 years. Following retirement, he spent a year teaching nursing students human anatomy and physiology at Kansas City Kansas Community College. He also practiced at the Fort Leavenworth Veterinary facility for a year.

As a child Dewey accepted Christ as Savior and never hesitated to tell others he believed the Bible was the inerrant Word of the Creator God.

Burial with graveside service was held at the Burr Oak Cemetery followed by a celebration of life dinner on February 11, 2022.