To share your memory on the wall of Ana Rodriguez, sign in using one of the following options:

She attended St. Joseph school in Atchison and graduated from Immaculata High School. Ana went on to receive her Bachelor’s Degree in Business from Park University. She volunteered at CASA for 10 years, which she enjoyed immensely as well as raising funds and awareness for the American Cancer Society, “Relay for Life”. She enjoyed traveling, assisting others, volunteering and cooking. Ana leaves behind a legacy of love for her family. Together with her husband they owned and operated Discount Carpets.

She was married to Elias “JR” Rodriguez for 48 years. They had two children, Kristin and Eduardo, as well as four grandchildren, Eddie, Alex, Michael Christian and Charlee. She has many aunts, uncles, cousins, brother and sister in laws, and was Tia to nine nieces and nephews; Angel, Shawn, Franco, Missy, Tommie, J D, Alisha, Kevin and Nicole, along with her daughter in law, Christina and friend to many.

Ana was preceded in death by her parents; brother, Adolfo; a sister, Maria de La Luz; and her daughter, Kristi.

She is survived by her husband JR, son Eduardo (Christina) Rodriguez, and sister Chata Brawner.

She will forever be loved and missed.

Visitation beginning with praying of the rosary will be from 3 to 5 p.m. Sunday, Jan. 31, 2021, at the R.L. Leintz Funeral Home. Mass of Christian Burial will begin at 10:30 a.m. Monday, Feb. 1, 2021, at Immaculate Conception Catholic Church, with Fr. Glenn Snow, O.Carm., as celebrant. Private burial will follow at Mt. Calvary Cemetery. Memorials are suggested to CASA (Court Appointed Special Advocates) or the Alzheimer's Association.
Read Less

To send flowers to the family or plant a tree in memory of Ana Rodriguez, please visit our Heartfelt Sympathies Store.

Receive notifications about information and event scheduling for Ana

We encourage you to share your most beloved memories of Ana here, so that the family and other loved ones can always see it. You can upload cherished photographs, or share your favorite stories, and can even comment on those shared by others.

Jorge & Marita Marcano, Ariana Englehart, and other have sent flowers to the family of Ana Rodriguez.
Show you care by sending flowers

3 trees were planted in the memory of Ana Rodriguez

Posted Feb 01, 2021 at 12:01pm
Remembering you and Tia Anita in our minds and in our hearts, and with gratitude for always treating us like family when we lived in KS.

Posted Jan 31, 2021 at 05:15pm
With sincerest sympathy, Anita's memory will live on through her family and all the lives she has touched. She has truly earned her crown in heaven

Posted Jan 31, 2021 at 04:48pm
To the Rodriguez family: I am so sorry to learn of Ana's passing. She was so kind and full of love with such a warm spirit. Our heartfelt condolences. Paul and Monica Sparks
Comment Share
Share via: 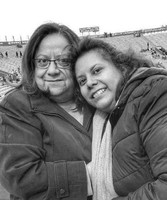